I'm glad you could visit. My stitching brings me joy and is a source of relaxation. Visit often and feel free to leave comments.

I have been getting a little bit of stitching in over the holidays but not as much as usual. I did manage to stitch up two PS ornaments and am now working on a PS bookmark freebie. I will post pictures once I finish-finish the ornaments....I have several that need to be done up. I just wanted to pop in here and post an update since it's been over a week since I posted last.
Posted by Teresa at 8:24 AM 1 comment:

Not so Itty Bitty

I don't have it written down(that I can find) when I started this....I know it was after Sept 2011 as that is when it was purchased, and after Feb 2012 as I finished the Teensy Weensy which I started first. Here is Keslyn's Itty Bitty over 2 on 40ct. using some called for colors and some of my chosing.

I have been busy finishing up Christmas preparations. When I sit down to stitch I have been working on an 'almost finish'. This Dimensions Snowy St. Nick was done all except the cording and french knots, which I decided to replace with beads and am quite happy I did because they sparkle nicely(in person). I can picture him done up as a banner for next Christmas. He is about 15 x 18.


Next is a fob I made from the pattern of Just Nan's Flora Fifteen. The other side is pink. Actually I made several of these pieces and realized they were the wrong count for the white ones so the spares(1 set) ended up as this fob.

These next 2 are the results of my trial with Hobby Lobby framing. The original intention was to just order the frame and put them together myself. The young man helping me said they lace so I thought I'd give them a try. When picking up another young man was helping me and said all over coverage stretches better(duh, but most cross stitch isn't all over coverage). Anyway even though they aren't as straight as I'd liked they are probably just as good as I a non-professional framer could have done....can't decide if they will get the whole job in the future.
This one isn't quite centered and is the worst for being more skewy (word? lol).   ;(

Since it's Christmas, I thought I would show our stockings. 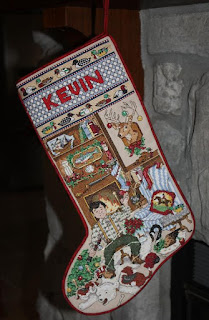 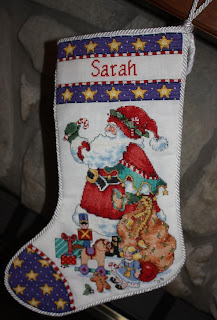 Mine is two sided since I liked both hobby rooms. 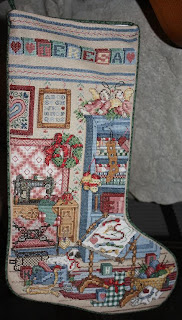 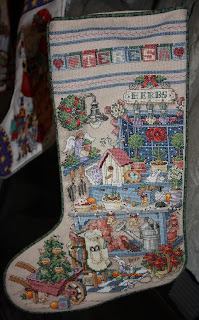 I purchased this pattern quite a few years ago at Hands to Work's trunk show at my LNS. I used more than one skein of Silk N color so I had to put it aside for a bit waiting to get the new skein. It originally called for one shade of brown silk (NPI) and on vintage exemplar but I like to change things around.


This chart is going into my sale album. See either here on the Sale tab or my photobucket albums.
Posted by Teresa at 7:25 AM 6 comments:

and honor copyright rules especially for our designers. Also please do not copy my photos or use them without my permission even on Pinterest.

Goals of projects to start